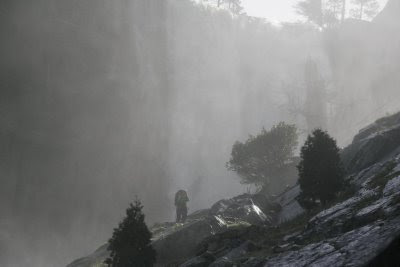 Last weekend I was in Yosemite. There was all this conversation about what to call my blog post ... "You Talk Too Much ..." was one candidate "That's Gonna Leave a Mark" was another. In all fairness to the events, two things happened that will make this weekend unforgettable. There was a serious thunderstorm on my 15 mile hike Monday, and a 31 year old woman disappeared from the trail we were on about the time we were there. These events have left marks, both literally and figuratively.

About 3:30 P.M. on Monday (May 18, 2009), a 31 year old woman named Katrin Lehmann disappeared near the Vernal Falls foot bridge, presumably having gone into the Merced River. How this might have happened remains a mystery, but there's not much doubt that falling into the Merced River on Monday would result in certain disaster. The earnest start of the thunderstorm was at just about that time, and it may have contributed to the disaster by making everything wet and slippery, and radically altering the visibility by reducing the light, and by repeated flashes of lightning. As if that wasn't already enough, the storm threw down hazelnut sized hailstones, encouraging panic, and causing everyone to run for cover.
Here's the flyer that I saw in the deli on Tuesday. 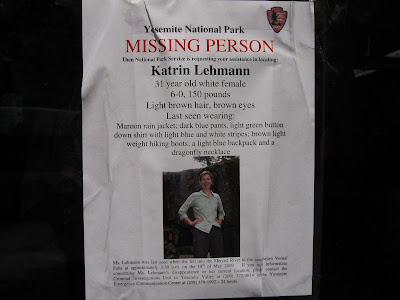 On Monday, two friends and I started early, eating at the Lodge, and were on the trail to Half Dome™ by 8:30. It's a signifigant hike from the valley to Half Dome and back in a single day, so I immediately encouraged my friends to set their sights for the top of Nevada fallas and then we could have a snack and see how things were, then decide to push on. It started as a really nice day and hot, so we packed light, and travelled quickly up the trail. The misty part of the Mist Trail™ below Vernal Falls was cold but mostly refreshing, and we all changed to a dry shirt after the drenching. My friends and I easily covered the 3.2 miles up to top of Nevada Falls and pushed on to Little Yosemite Valley where we heard the first thunder of the day.

I immediately annouced that that most likely meant we would not be able summit Half Dome, due to the obvious risk of death by lightning. We decided to push on, because we felt good and thought if we could just get to where we could see it -- we could take a picture and earn some bragging rights that way. We climbed the additional miles up the trail, with an objective like -- we turn back at 2:30.

It had clouded over and our hopes for a glorious photo were pretty much crushed. It sprinkled and there was thunder and well ... I had oddly left my rain jacket behind. It was wearing us a bit ... the mountain ... it was kinda steep and we were pushing hard to get to the tree line, which we (I -- to be fair) estimated at 8 miles and 4200 vertical feet from the valley floor. At around 2:00 we were nearing the end of the trees and taking a short break to discuss our remaining time, when it started to actually rain a bit. I tendered that it was looking like a good time to turn back ... since we were near the snow at about 8000 feet elevation in the Sierras in May without a raincoat, or even a jacket, and it was afternoon ... and ... well ... raining.

The trip downhill went quickly. Andrew, our young friend, surged ahead to start for home early, with instructions to leave a message on my cell when he had made it down. At 23, Andrew was a strong capable hiker, and easily left us behind. At about 3 miles from the valley floor, it started to rain in earnest. The trail is steep and it's mostly granite. At this point it's wet granite. It began to hail. Hard. Pea sized hail stones pelted us on the open sections of trail. Pea sized hail doesn't hurt, really. As the storm increased in intensity, hikers on the trail began to gather into groups and move really quickly. I really think that survival instincts began to kick in. We were in a canyon yes, but there were many exposed granite stretches, and it grew ominously dark, and there was frequent lightning. It was around the time that we had gathered into a group of 10 or 12 and began to realize that there was no hope of remaining dry in any way, that the sky opened up and cast hazelnut sized hailstones mixed with interval lightning. It hurt and someone started screaming. The lowering of the light level combined with the wet trail and the confusion induced by both the lightning flashes and the screaming: suddenly the trail itself became hard to identify.

A stranger in the group named Dennis and I stood and clearly looked at the trail signs and found the trail and took it and the group of 8 or 10 tweenagers followed us and raced past us. We had turned onto the pack trail, leaving the Mist Trail and heading uphill in the canyon. My friend Robert was a bit behind so I waited and let Dennis lead ... I was beginning to realize that things were going sideways and I was slipping in to trip leader mode ... I was counting people ... taking notes in my head ... keeping track of the group around me.
Well ... when you're following a river downhill and suddenly you are climbing uphill away from the river ... it doesn't take too long before you realize you going the wrong way. I said to Robert, "This is wrong, we are on the wrong trail ... I know this goes to the valley ... but in this mess, I want to go on a trail I know." I ran ahead to tell Dennis what I thought. Those people ran past in the other direction ... "Wrong way." We all turned around. It became harder as we retraced our steps. I could see my friend lose momentum. For just a moment I worried about him.

Anyway ... once we knew we were on the right trail again, we just hammered it out ... Wet, rainy, treacherous down climb on granite steps, 300 feetabove a vertical drop into a raging torrent of a a river, or just a few feet. One false step equals could equal instant death. One foot in front of another. A few more miles ... miles of wild Yosemite, a stormy vindictive Yosemite.

As we reached the valley floor there were folks lining the river, rescue teams, rangers and firemen. The bridges were covered, the shuttle buses delayed ... wow, what if it's Andrew. Rumours floated about ... "It's a nine old girl," said one. "She fell off the bridge above the falls," said another. "I know someone that saw the body," said another.

Sometimes, mistakes are fatal, accidents are fatal. Andrew made it down. He was wet, but changed into his pajamas in his car. We all went over to have chili at the Ahwahnee lounge.
We went to see the Gods of the mountain and they were kind to us. We lived. We can hike another day. We escaped lightning, hail, a raging river, a slippery trail over tons of granite, and our own weaknesses. Katrin Lehmann wasn't so lucky.

If you're going to go, drowning in the Merced River, just moments after a view of Vernal Falls, isn't that bad of a way to go. 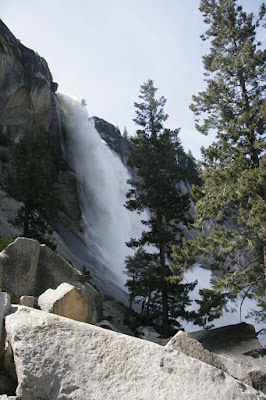 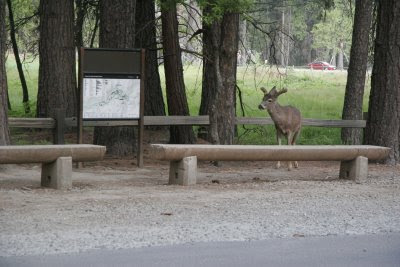 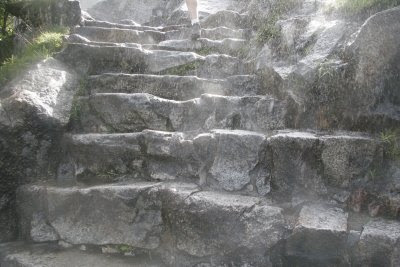 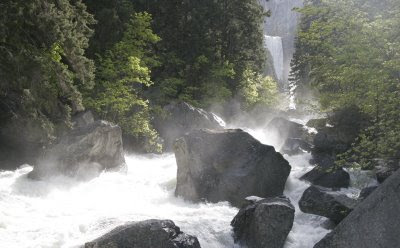 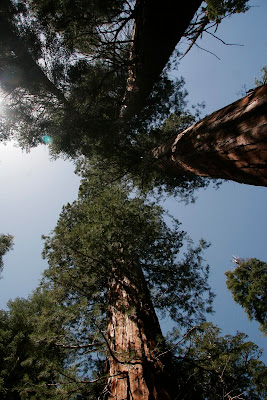 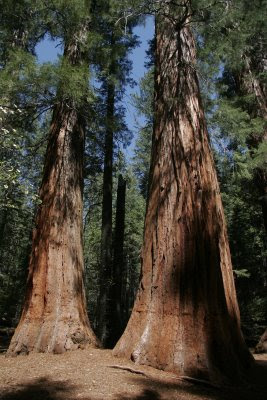 Posted by shawnkielty at 7:39 PM 4 comments: 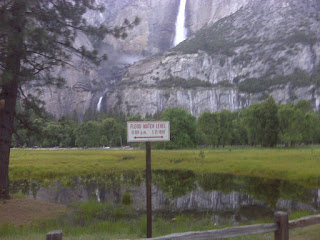 Posted by shawnkielty at 10:23 PM No comments:

A Pleasant Day in the Hood 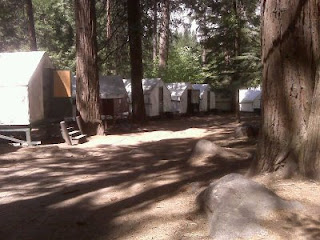 Posted by shawnkielty at 2:52 PM No comments: 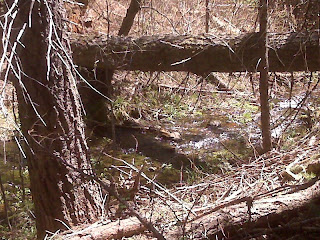 Posted by shawnkielty at 1:23 PM No comments: 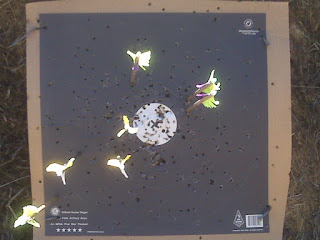 Posted by shawnkielty at 1:12 PM No comments: 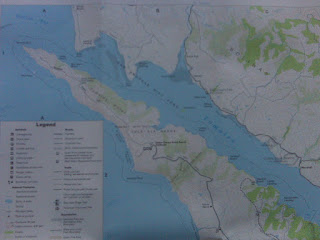 Sent via BlackBerry by AT&T
Posted by shawnkielty at 5:24 PM No comments: 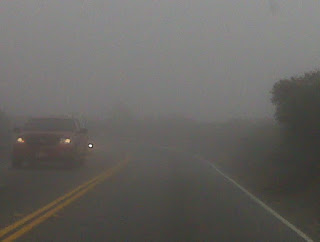 Posted by shawnkielty at 5:22 PM No comments: 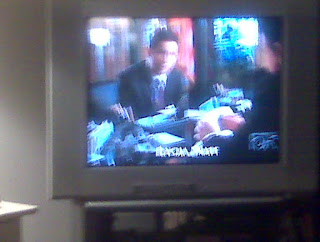 Posted by shawnkielty at 12:51 AM No comments: 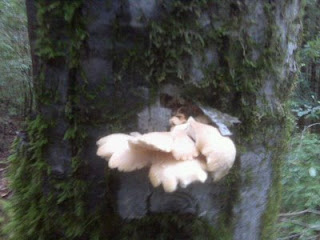 Posted by shawnkielty at 2:04 PM No comments: 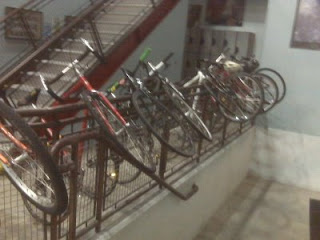 Posted by shawnkielty at 10:14 PM No comments: