Moonlight Hike to Half Dome Version 3

In the deep recesses of my memory I lies my first ascent of Half Dome. A three day hike from the Valley to Half Dome, Clouds Rest, and back to the Valley. Day 1, hike 4 miles to Little Yosemite Valley. Day 2 hike to Half Dome summit and back, then on to the summit of Clouds Rest. Day 3, hike the 10 miles and 6000' vertical down to the Valley. Notice having 10 black and blue toes for several months following.

I don't remember it being anywhere near this painful, however. It's three weeks to the day since the hike to Half Dome, and I can just barely manage to walk in a way that looks normal. During the hike up, I was golden, in fact, as we approached the su I was tired, but still very strong. On the way down my toe began to get hammered in my boot, then I began to try to protect it. For at least four miles of the hike my foot was swollen, damaged from the pounding, and a bit heavy. The day after the hike I was pretty good. It was completely traumatized and all that ... but the following day I went to the climbing gym.

Two days after that I was getting x-rays. The day after that it seemed that the swelling was increasing. Apparently it isn't fractured. I read about a treatment that the Muay Thai fighters use called dit da jow. It's a liquid you apply to your feet and shins to reduce the damage from beating them to toughen them up.

I went out to get some of this -- which led me to the martial arts supply warehouse -- where I was directed to the Chinese apothecary. I was asked a lot of questions about my foot and directed to use the dit da jow and wei ling xian (Upright Virgin's Bower), a shrub used to dissolve fish bones if you happen to have swallowed them ... I was directed to boil in vinegar for 5 minutes and apply to my feet. I used the stuff. It seemed to help.

last Monday I went to an Osteopath ... which helped a bunch. He rearranged the bones in my foot a bit. And now I can pretty much walk. Last night I tried to swim ... not really well, and it was kinda painful. It looks like I may be ok by the next hike I have planned on August 9. Maybe.

Pass the Ibuprofen, please.
Posted by shawnkielty at 11:50 PM 2 comments: Links to this post 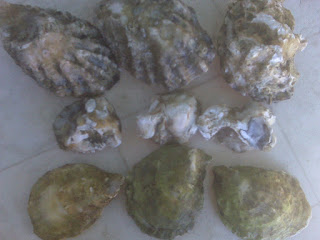 Posted by shawnkielty at 5:17 PM No comments: Links to this post

Moonlight Hike to Half Dome Version 2

Posted by shawnkielty at 2:21 PM No comments: Links to this post 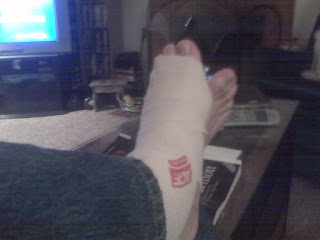 That's hydrate, ibuprofen, rest, ice, compression, elevation ... I've decided maybe I should follow my own advice. In all this somewhere there might be an admission that I am actually injured.
Posted by shawnkielty at 11:30 PM No comments: Links to this post 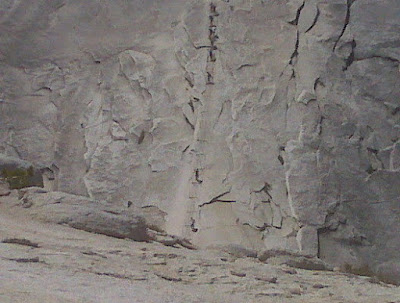 People climbing up the cables to the Half Dome summit. 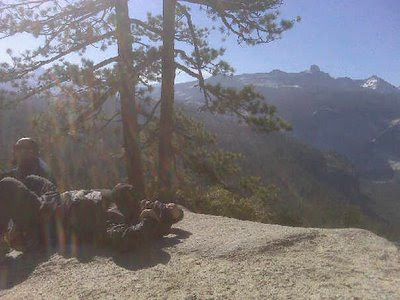 My friends near the top. 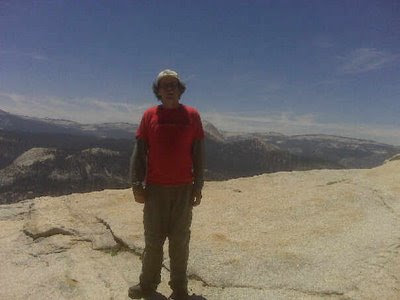 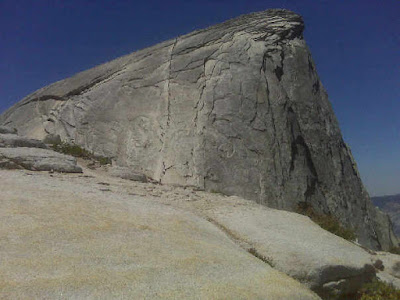 View of the cables and Half Dome Summit from the sub-dome.
The short version. My three friends and I went to summit on Half Dome in Yosemite on 7/8. We left San Mateo Tuesday night at 8 and arrived at the trailhead at 1:30 AM. We hiked the Mist Trail in the moonlight to arrive in Little Yosemite Valley at dawn. We only stopped to puke once. We proceeded up the trail. 2 of my friends reached the summit at some time around 11:00 AM, while my other friend and I aborted to wait at the base of the final climb. I sprinted up some one hour later reaching them just below the cables to let them know it was time to go.
We hiked out to have some really crappy food at the Curry taco stand, and managed to drive home without falling asleep or puking.
Half Dome 2, Hikers 2. 16 miles, 4600 vertical feet, 4 great stories.
My foot hurts.
Posted by shawnkielty at 12:50 AM 1 comment: Links to this post

Email ThisBlogThis!Share to TwitterShare to FacebookShare to Pinterest
Labels: Half Dome, hiking, Yosemite 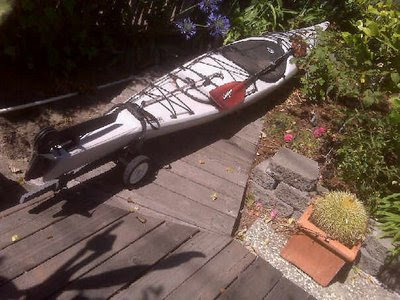 Yep, so I'm reading Down the River, by Edward Abbey. I'm inspired to call myself a "Wilderness Philosopher," as he did, and see if I can get some gigs in the wild that way. I suppose I'll need to write a few books to help legitimize my claim. At least one of my friends has started to refer to me as a "Wilderness Philosopher," which of course ... seems a bit of a stretch to me. In the book, Abbey takes a sportyak (I am thinking hairy four-legged mammal with a number on its and a saddle ala Dr. Suess and wonder what exactly is a sportyak) down the San Juan inspiring me to remember that I have a kayak ... and that one of my friends in intensely interested in kayaking, wants me to go kayaking with him. I relent and agree to teach him the basics.
And then the kayak mag comes in the mail ... reading ... glancing through it ... and I read the Dirtbag Diaries page on Mongolia. Serena Hollmeyer says, "We bought some bacon one day, and a Mongolian proudly served it to us raw. To wash it down he gave us Airag, a mildly alcoholic, fermented mare's milk that tasted like a cross between gasoline and urine." Is this a fate that awaits us if I teach him to kayak?
You know how it goes ... one day it's the basics ... then a paddle outing ... then an expedition, then suddenly, its kayaking in a lawless wilderness in Africa or Mongolia. His language skills are good, and he's brave, albeit young, so no doubt there's hope for him. As for me ... I doubt I'll be as successful as either my young friend or Abbey.
Nevertheless, I rolled my kayak out of the mothballs, the first steps in a plan to teach my young friend to self-rescue, paddle generally, and do an eskimo roll. It's inevitable that there will be some trip, with a bunch of people, a few dozen water fights, some hiking, somewhere in the near future.
Posted by shawnkielty at 4:05 PM 1 comment: Links to this post