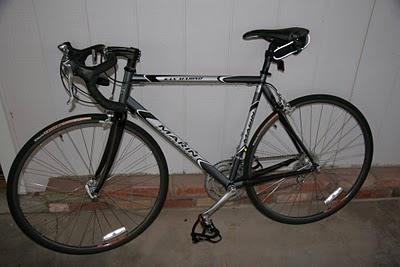 When I should let my friends in the Twin Cities know that I am planning a trip that includes me being dropped off at MSP in May with my bike.

That's what my great-grandmother always said. Today, two people I know passed. One, a person who has been a part of my life since my earliest memories, whose children were my playmates, and friends. Our friendships were there all the time, but when something like this happens ... the strength of those life-long friendships rises to the surface, tears flow, bonds renew ... She was my next door neighbor for most of my early life, for 20 plus years. She ran a catering business from there, which grew up to be a restaurant later. A restaurant I frequent and enjoy. I think she's been feeding me once a week or so since I was about two. There's no question, she's been a powerful figure in my community for my entire life. The loss is immeasurable. My heart goes out to my life long friends.

It's not just my community though. A huge number of people I know have been there, met her, know the joy. So many people around me have expressed their sadness at her passing, people I never knew were there, never imagined would have known her. We'll need to find a way to carry on.

Two -- Franchot, a man I barely know, a patron of a cafe I frequent, passed away today. I don't really care about the details. We talked often, he took an unique interest in me, in what I was doing, in the things I was doing, in a way that let me feel as if he was my friend. I looked forward to seeing him. He was a good man. He cared. A friendship cut so short. What a tragedy.

And for me -- I've been inspired by watching the Olympics. I went to the gym last night and worked out hard. All my junk hurts today. I've been getting flabby. I decided I need to start to ride my bike more -- so I took the Surly to work in my truck. I rode at lunch. 9 miles. It was good. I hurt, but I feel good.

Now, about what my grandmother said ... I'm waiting for that third thing. That third bad thing.
Posted by shawnkielty at 12:17 AM No comments:

... where you claim to want to restore my confidence in your quality product. You have a long way to go. I noticed the picture of the 70's era Land Cruiser inspiring me to want to own one of your tough vehicles. It's not working really. Those pictures, those suggestions of happy families; those are of old cars, an old Toyota -- that's not me and my car.

I am the guy whose always scraping together an extra grand to get his car maintained. I am the guy that goes to Toyota to pay a couple of hundred bucks to have a guy explain how the air conditioner is working the way it originally did, even though we all know better.

I remember after I drove my truck though some water 18 inches deep for a while and then the slave cylinder on the clutch failed, which isn't that unusual (or is it?), that the Toyota dealer (2 actually) told me he couldn't find anything wrong, even though the clutch pedal randomly collapsed to the floor and stayed there while driving. When this happens it is important to reach down and pull it back up to it's normal position, which is what some people are telling Toyota owners they might want to do to their gas pedal while there car is speeding ahead. Lucky for me the local mechanic was able to diagnose and fix the problem with my clutch.

I remember seeing those Kurdish Toyota trucks, with the machine guns mounted on them, tearing up the desert and wonder if they had to stop and turn back during a mission because their steering rack failed in the middle of a trip. I am sorry, the romance of it all just isn't getting through to me. The quality of your cars, I am thinking ... it's just not there.

My truck is a 2003 Tacoma, and the real story is about the electronic throttle controller, my gas pedal. When it first started behaving erratically, my car had about 90,000 miles on it. The primary symptom was that the acceleration would disappear randomly while accelerating, particularly at freeway speed.

So I took it to the dealer, several, in fact. Superstition Toyota in Mesa Arizona, Toyota 101 in Redwood City, California, and City Toyota in South San Francisco. Repeatedly I was told that they couldn't find a problem ... bring it back if it gets worse. SO finally I took it to the independent Toyota Shop (C&T, in San Mateo, CA), and they diagnosed and found the problem, a faulty throttle motor controller, a part which costs about 1300 dollars. I am sure this is why Toyota didn't want to find the problem. C&T found me a used one which they installed for much less, and it's been running well since.

The problem that I see isn't so much that the quality isn't there (it obviously isn't), but to have seemingly reasonable people tell me that there's nothing wrong with my car, when there clearly is, is definitely a problem. In fact, denial of the problems with Toyota vehicles seem to go way beyond my car and the three or four dealers I have dealt with, it seems to stem from the very top level of the company. Listening to the news reports leaves me thinking that Toyota knew there were problems with their cars, dangerous problems, and categorically denied the problems at a time when full disclosure seemed imperative.

It's really easy for me to believe this since they have repeated done this -- denying there's a problem -- about every problem I have brought to them.

Your advertisements are good Toyota, but I feel that you are trying to whitewash a somewhat dire situation. It's hard to believe the sincerity of the ads, when your mechanics and service advisors have been standing in front of me, telling me it's fine when it isn't, on a regular basis for several years.

Personally, after this car, I don't think I'll ever own a Toyota again.
Posted by shawnkielty at 10:16 AM No comments:

In The Wild ... With Other Sublime Fish.

So I had a long protracted conversation while eating raw fish earlier today. And we talked about whales and sharks, and monkeys, and predation ... and intelligence. And intra-uterine cannibalism.

Then I brought up the sublime. Friedrich's Monk at the Seashore. One man standing before the storm. Dylan, singing Shelter from the Storm, trading for a lethal does of salvation, Rothko's void, a terminal abyss we may all have stood before. It's a common theme in my early writings, man's tendency to isolate himself from the wilderness. The ocean in Friedrich's painting, is just beyond the monk, hence the sublimity of it, the storm is held at bay, which I submit, is quite delightful. Rothko's glimpses into the void remind us that we haven't fallen in, we haven't submitted to our desire. My early arguments for the void were sophisticated, quoting Foucault, Lyotard, even Carlos Fuentes, I wove a complicated treatise into the sublime, a treatise of fear.

I had no idea then that knafeh even existed. Knafeh is effing sublime. Dante's gluttony. It is so exquisite, so rich, such a wilderness of joy that one might fall to it. As my friend Carol said, "I think I'll cry." Without help, I surely would have succumbed. It is a succubus. I should have died.

So what's the point of all this? To discuss the merits of some other dessert? No.

I ate a squid the other day, grilled, no less. Ika Shioyaki. I felt like an animal. We are clearly at or near the top of the food chain. Very few other animals would find us to be food. Crows. Vultures, sharks, coyote, polar bears, mountains lions, wolves perhaps. Orcas? I have trouble making sense of the natural order of things. I feel like an animal. Yet we, as a society, have separated ourselves from the animals.

In doing this, we have explained so much. Our management of the animals, the wild lands, the landscape. Our justification of our own intellectual superiority. Our insistence into the management of all of the wild aspects of the earth. We explain our existence, our raison d'etre, as caretakers of this place, the Earth. Haven't we made a few presumptions? Sure, we should take of this place. But, are we sure we are right?

I am in a wilderness, yet I am not an animal. Go figure.

Posted by shawnkielty at 12:04 AM No comments: